The Spring PvP Season continues, and Flaxative has updates for you! We saw several new faces in the tables this week, one of whom is an old player with new rating cred and a new guild! As always, those who made the chart deserve some congratulation.

• Average standing (and total games played) among the top 20 winners were down a bit this week, I think attributable to the launch of the Attack of the Artifacts expansion. This is the first week that total games has actually decreased, having gone up by a whopping 33% in the second week of the season and then increasing again by a smaller amount last week. But it happened: the constant free events of Attack of the Artifacts launch week did manage to poach some games—and that makes sense, because the launch events have been amazing fun. Honestly, I’m surprised that so much ranked play continued to happen in the face of all the new stuff. A good sign!

• Average rating among the top rated players went up another 10 points. Rating inflation? Destabilization due to map rotation change?

I’ve been tracking the overall standings for the season since the second week, but now that we’re 1/3 of the way through the season, I figure I’ll share them here. This list reflects who would win what ranking if the season ended right now. The folks on top of this chart are all extremely dedicated Card Hunters, and definitely deserve their spots as far as I know. I think everyone on here is worthy, but it’ll be interesting to see who rises and who falls as the season continues. After all, there’re another nine weeks! Who do you think will emerge on top? Are the winners locked in, or could they still be supplanted?

Attack of the Artifacts Environment

It’s a little early to analyze how the expansion is affecting the season, but it’s not too early to say that it is. Several new cards are being played to good effect, but a few in particular caught my eye as I was spectating ranked games this week. 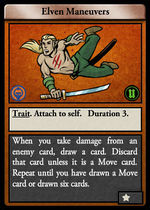 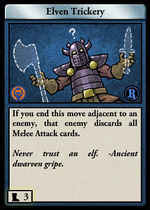 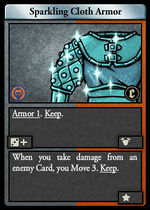 Card Hunter just got a whole lot more mobile, friends—elves are back with a vengeance. While dwarves will probably remain “better” thanks to their hit points and Toughness, elves just received an upgrade that will almost certainly make them a larger part of the game. Elven Trickery sounds good on paper. It’s even better in practice. Elven Maneuvers, in the right deck, is a trait version of Martyr’s Blessing—and at worst, it’s a free deck-thinner. Sparkling Cloth Armor isn’t the beast that it was during early testing, when it allowed you to move from any damage, including your own, but it is still an amazing card. It’s probably pointless to speculate too much, but I’m very interested in players’ thoughts on what’ll really impact the metagame. Will Elven Trickery push players away from warriors? Will 3DC become more powerful—or will the increase in elves reduce its importance? Firestorm is good against elves, but it’s bad against Elven Maneuvers and Sparkling Cloth Armor.

Are you aiming for the top of the season?

If so, how will you leverage the new cards and items to your advantage?