Two months of PvP Season—we’re 2/3 of the way there! This week Flaxative looks at some balance issues in high-tier play.

A couple quick stats—
• Most Wins category represented the smallest number of games played per week since the first week of the season. Burn-out? Leagues?
• Average standing among Most Wins players was at an all-time high.
• Average rating among Highest Rated players was the highest it has been as well, at a whopping 1726!

As always, competition is tough, and I extend congratulations to everyone on these charts.

There’s no question that the promise of prizes in the PvP Season has led to increased participation in ranked play. Players are also playing better than ever. According to the front page of Farbs’s Card Hunter Meta site, roughly 97% of players are in good standing. The percentage was significantly lower two months ago. In light of a swelling playerbase—bolstered, no doubt, by the expansion—and an increasingly competitive high-tier environment, the chart-toppers for the season thus far deserve some praise. Let’s see who they are:

Will they stay on top?

Some of the players who play the most games are losing some steam, with weekly wins lower this week than any week previous in the season. There is definitely room for upsets in the Most Wins category, and as we can see some have already happened. Tuknir has fallen out of the top 3; Clubber Lang has steadily risen four ranks in the last month, climbing into the top 10; it’s neck-and-neck at the bottom of the list where a number of Sorcererers are jostling for prizes. I honestly have no guess at what the final standings will be for this category; I expect most of the faces on this list to remain on it, but I have no idea where on it they’ll end up!

On the other hand, it is increasingly obvious that it is hard to lose your rating-based rank if you don’t experiment or stop playing for a week. The folks at the top of the Highest Rated category have been mostly the same people week after week, and it shows in the overall standings. That isn’t to say there hasn’t been motion, however—Stexe in particular has crept up on his competition, and, being the highest rated player in the game currently, may rise one or two rungs in the season before it’s over.

And hey, let’s talk about that rise… 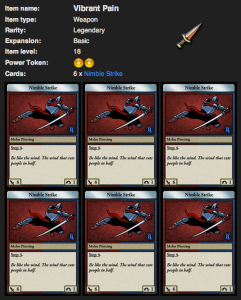 One bit of recent forum drama centered around one user attributing Stexe’s meteoric rise to his acquisition of a second Vibrant Pain, the warrior weapon most widely recognized as an absurdly overpowered piece of gear (perhaps, ‘the strongest’ piece of gear in the game). Stexe was quick to defend himself, claiming that the details of his build, combined with his tactical expertise, granted him his gain.

Vibrant Pain, and perhaps more generally the availability of Nimble Strike as an extremely undervalued bomb (only silver??), has been fueling bad feelings in the game’s community since inception. No one wants to lose to the thing; everyone wants to have one. Less competitive players defend it, pointing to their mediocre ratings despite their possession of it; hardcore players complain about it even as they use it. And most people who don’t have one want it gone.

Blue Manchu has been very careful about not rebalancing cards or items when the need doesn’t exist, and has taken what is basically a conservative approach to dealing with balance issues in the ranked environment. This approach is well and good in theory, but as a player who cares about the health of the game and who watches the games of top players, I have to wonder if it’s working.

Almost every game I’ve spectated in the top tiers over the course of this season has been a frenzy of Whirlwinds, cards that increase variance at the expense of tactics, favoring the player who has played less (where’s the fun in that?) or has on average better gear/draws. There is skill to using Whirlwind effects, to be sure, but there is also the fact that dwarves with Vibrant Pain simply do better in a storm than any other character/item combination in the game.

I think it would be really interesting to see what would happen to the environment and the (barely existing) metagame if these blatant offenders were brought into line. No one player has suggested a perfect set of changes, but Stexe accurately calls out most of the problem cards in this forum post from January.

Unsurprisingly, the PvP season’s Highest Rated category has been consistently dominated by players who play the cards with which Stexe takes issue. There will always be some options that are better than others, and in any game with a lot of options the competitive scene usually focuses on only a few of those. High tier PvP in Card Hunter, however, feels somewhat stagnated.

I’d love to see what the devs have in store to deal with this problem.

If you’re running an interesting build in ranked, and would like me to feature it in a future blog post about the PvP environment, please send me the build on the forums! I will happily cover it and show off your tech 🙂