Changes are coming to Card Hunter – big changes! This is the first in a series of posts explaining what those changes are as well as giving background on why we’re making them.

An online card game is uniquely placed to try to constantly improve the game experience by rebalancing cards. We try to restrain ourselves from making frequent changes though, as we don’t like rebalancing cards or items that people have already collected. We know that impacts your enjoyment of the game and we want to minimise the number of times we do this. Right now though, we feel there’s an opportunity to improve the multiplayer meta-game and the campaign experience with a suite of changes. In the long run, we think these will make Card Hunter more fun and set it up for the future.

These changes are coming in a big block. They’ll be pushed out to our test server first, where we hope you’ll try them out and let us know what we think. We’re very interested in community input on these changes – after all, we devised our responses by looking at play data, reading forum threads and listening to what the community has been saying. We’ll continue to do that.

Here are some key cards that we’re changing. We think you’ll recognise these cards. You may also have some that you think need addressing that aren’t on the list. Those changes may come in the future but we want to see how these shake out before addressing every card that might be causing issues or which could be improved. 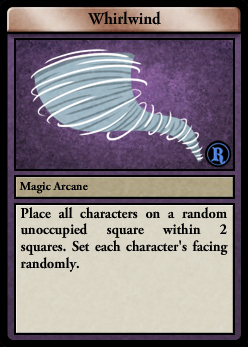 Card Hunter is a game about positioning. That’s what sets it apart from other card games. Both Whirlwind cards subvert that paradigm because, although they affect position, they ignore distance. They can move entire teams from one side of the board to another – which is too powerful and random an effect.

When we designed these cards, we thought they wouldn’t see serious play as their random nature made them too unpredictable. That might be somewhat true of Whirlwind, but it’s certainly not true of Whirlwind Enemies. If you time your play right, it’s very likely to hurt your enemy – and in a way that is hard for them to come back from.

Our solution is to tackle the distance-ignoring effects of these cards head on. From now on, both will work more like Maze than a global positional reset. Here are the new card rules:

Whirlwind: Place all characters on a random unoccupied square within 2 squares. Set each character’s facing randomly.

Will Whirlwind still see play after these changes? Time will tell. Note though that both cards are still special in that they are in the small group of cards that affect characters globally regardless of range or line of sight. They can still be used to shake up a board position – just not in a way that’s impossible to recover from.

Note also that Maze will now work the same way: it will place a character on a random square within two rather than move the character. This can be important when considering difficult terrain and so on. 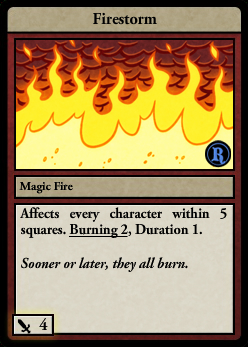 Firestorm is a card in a very similar position to Whirlwind. It also ignores distance and line of sight. It encourages turtling builds that sit in the corner and ignore what the game is supposed to be about – positioning and movement. To fix that, we’re making the card care about range.

Firestorm’s new rule text will be:

Firestorm will now require you to position yourself to use it effectively. It can still be used in interesting ways – through walls and over water. It will even be possible to exploit it more effectively on some boards where you can bracket your enemies without hurting your own team, but it won’t be possible to just huddle in a corner and Firestorm away while your opponent is on the other side of the board. 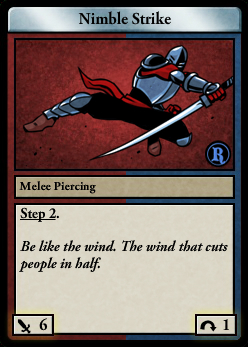 These cards, Nimble Strike, Vicious Thrust and, to a much lesser extent, Dancing Cut also mess around with distance in an over-powered way. Two of them, Nimble Strike and Vicious Thrust, are substantially under-costed, making them no-brainers to include in Warrior builds. In addition, their long movement distances allow Dwarf (and Human) Warriors to evade one of their chief weaknesses relative to Elves – slow movement. A Nimble-Striking dwarf can double its default move distance with a single card AND attack without a pause. That’s too much, especially at the quality grade of the card.

So, from now on, there will be NO Step cards in the game that step more than 2. These cards will have their Step values adjusted as follows:

Note that Nimble Strike and Dancing Cut will continue to be the longest stepping cards in the game – it’s just that the length of that Step will be much shorter. Dwarf Warriors will need to look to other methods of improving their movement – and Elves may find their Dash default moves more valuable.

One additional effect of this change is that the other step cards in the game, too often ignored, will become more viable. Anyone for a Lunging Hack? 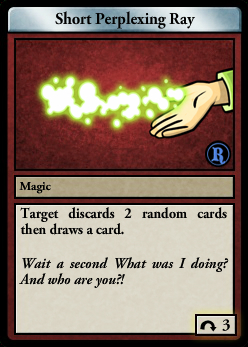 Discard isn’t much fun to play against. Short Perplexing Ray is a powerful card and a card that often leaves its target character with nothing to do.

Short Perplexing Ray will continue to cause the target to discard two cards, but it will now also allow them to draw one back. Its rule text:

Its net discard is now only one.

Why would you now use this over Perplexing Ray, that also forces discard of one card? Well, if you time it right, you can force your opponent to throw out their more powerful cards, which are likely to have been held until late in the round – particularly good armor cards. So it still has its uses although it’s now a much more situational and will always leave its target with something in hand. 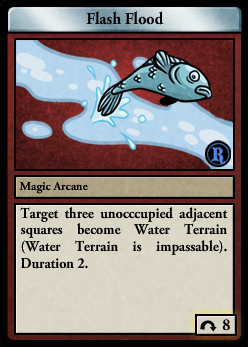 We like this card a lot and want to see it remain in the game as is – a card that blocks movement and sight and can’t be removed. However, we think it’s a problem that a player can get so many copies of it in their deck at the moment – up to 16 right now! Rather than remove or change items though, we are going to change this card and then re-introduce the original in a more limited way. All instances of Wall Of Stone will be replaced by the new card, Flash Flood. Here is the rule text for the new card:

These are perhaps the biggest changes coming along. In the next post, I’ll discuss a list of cards that are getting buffed in the upcoming release.