Last time, we talked about racial skills. In our third post on the upcoming balance changes, we’ll be covering general multiplayer changes.

The final topic to cover today is a few changes we made to cards with multiplayer in mind. Some of these cards didn’t change when we did our big set of changes two months ago because we didn’t want to change too many things at once; some of them were oversights; some of them are only recent issues. Regardless the case, we have set out to make the following changes. We’re really counting on your feedback for these. 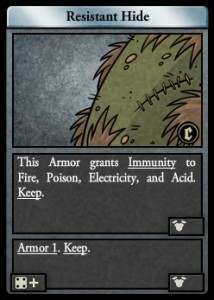 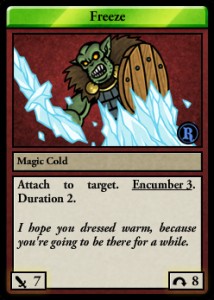 • Freeze damage increased to 7 from 4.

This card became a lot less worth running with the changes to encumber. We considered a lot of options for restoring its control potential, but ultimately decided it was cleaner to just buff its damage. We’ve heard a lot of feedback about this card, and we do not want to make it a halt card. Whether or not halt will become more prominent in the future is currently undetermined.

We opted to preserve Resistant Hide’s immunities, and simply make it far less good against other attacks (average damage reduction of .5 instead of 1.3). Arcane damage should basically all but ignore it, and priests and warriors should have little difficulty. Yes, the card can still single-handedly shut down some very narrow strategies… but it’s a lot less good the rest of the time, now, and, as any good fire mage will advise her peers, pack some armor removal. 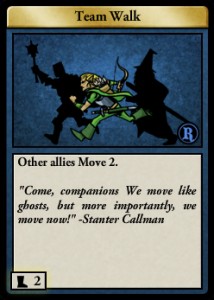 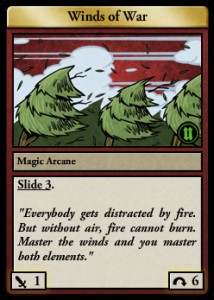 This card quickly became the center of attention following our latest balance changes. Control and anti-control cards had all been reduced in effectiveness, but Team Run still created 1 Dash and 2 Runs every time it was played. Sure, there are board states where it’s not good—but far more frequent are the board states where it’s too good. Maybe we hit it too hard with the nerf bat—only playtesting will tell. 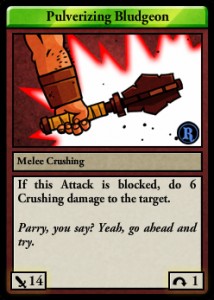 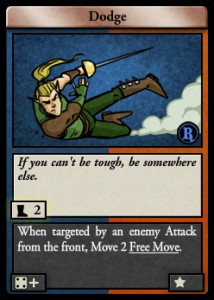 This card could accrue insane card advantage with the right rolls, and generally increased variance in card parity by way too much. So we had to rein it in. It loses the reusability of keep, and in effect just becomes a variation on Surging Shield Block. Its advantages: it can’t be discarded by War Cry or Unnerving/Startling Strike. Its disadvantages: it doesn’t work against AoE effects, and it only blocks things if you move out of range. It now works against more things than it used to, even if you’re encumbered, but it loses its potential to rack up tons of free cards.

We’ve felt for a while that Obliterating Bludgeon simply did too much damage for the multiplayer format, but we didn’t want to simply decrease its damage because it was a high-cost rare. So its base damage is down, but it gets a cool new ability. The same change was applied to Almighty Hack (now 16/8). Some big monsters retain the old vanilla attacks.

Miscellaneous Changes:
• Almighty Hack becomes Pulverizing Hack, which deals 16 damage, or 8 if it’s blocked.
• We talked about Mass Frenzy in the post about priests, but in case you missed it, we dropped the frenzy about from 3 to 2.
• We’ve renamed Weak Parry to Subtle Parry.

That should about cover it for general changes.