Hi everyone! We’re busy preparing the game for our upcoming Kongregate launch, and now is as good a time as any to improve the early campaign experience. Coming up we have a bunch of changes in the pipeline, primarily to low-level priest cards and racial skills. Additionally, some (primarily multiplayer) cards that we feel didn’t end up quite where we wanted them after our last balance changes are seeing some tweaks.

The biggest change we’re making to priests is a fundamental mechanical change to the way Assist (white) cards work. It used to be that some of these cards would say “May self target,” and that meant a priest could play those cards solo. You’ll notice if you log into the test server that there are now 0 cards with this rule. That’s because all Assists self-target now. Heal? You can heal yourself. Buff? You can buff yourself. A constant weakness of priests has always been that many of their strongest cards cease to function when their allies are dead or out of line of sight; we’re stripping that weakness away. Note that this change may make some cards too strong. We’ll keep our eye on that possibility over the course of the playtest.

It doesn’t say so on the card, but, as an example, all three of these can be cast on the caster.

Frenzy cards have had two problems historically. The first: besides Mass Frenzy, they couldn’t buff the caster. We’ve addressed this issue immediately above: Unholy Frenzy and Righteous Frenzy can both self-target now. The second issue: because frenzy didn’t affect magic attacks, the cards discouraged some types of builds—for the most part, if you carried frenzy, you wanted as many melee dudes as possible, as if you allied with wizards your frenzy cards became less valuable.

Our hope is that this change encourages more diverse builds with one of each class, as well as more variety among damage wizard builds. Of course, most importantly, frenzy cards should become universally more useful in singleplayer.

The third exciting thing for priests is that a lot of their lackluster low-level cards are being replaced. Some of you may mourn the loss of hilariously poor cards like Wavering Faith and Bungled Heal, but we’re optimistic that the replacements will be more useful in the campaign. It would also be neat if some of them became borderline playable in multiplayer. 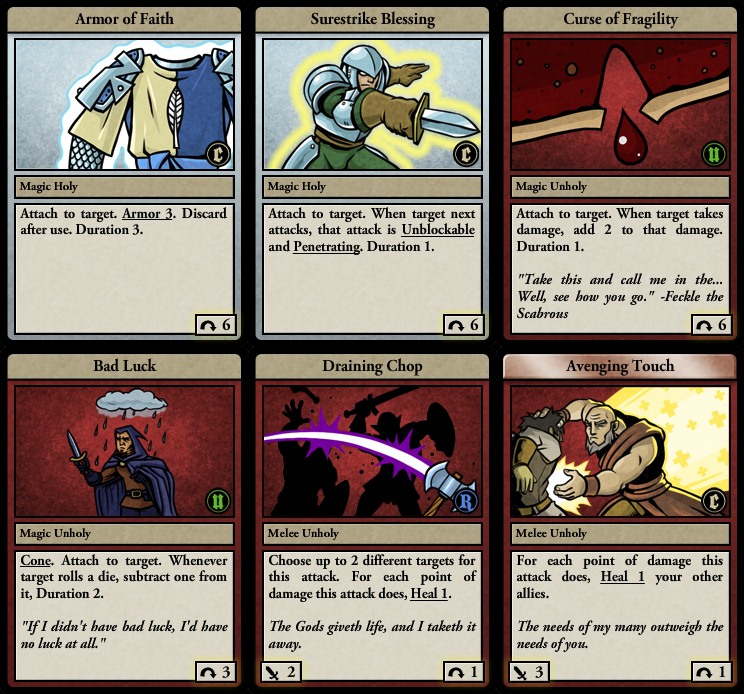 Armor Of Faith is basically a Rusty Armor you cast on someone. It can prevent more damage than Minor Heal restores, and it stacks with the target’s normal armor cards. It replaces Bungled Heal.

Surestrike Blessing replaces Wavering Faith as a cooler way to get around blocks and armor in the campaign. This is one we think we might have pushed too hard, so please, put pressure on it when you playtest.

I’m including Bad Luck here because it has changed so much it’s basically a whole new card. Blast enemy mobs with this cone to draw out or negate blocks en masse!

Consuming Spear is now Draining Chop—more interesting in singeplayer, still quite good. Besides, we felt we’d given vampires a bit too much range.

Avenging Touch used to be Touch Of Pain, a monster card that snuck into Attack of the Artifacts on two player items. It’s changed slightly (it no longer heals the user), and it’s also going to show up a whole lot more—I believe it’s on 10 items now instead of 2.

That should about cover it for priests.