Last time, we talked about priests. In our second post on the upcoming balance changes, we’ll be covering racial skills.

A common bad feeling in the early campaign was a dearth of great racial skills. You get that racial slot and its bad cards weaken your deck. You go several levels before you can even begin to recover your average card effectiveness. Often the best option has been an item with a trait Handicap for cycling purposes. Displeased with this, we set out to determine what was or wasn’t playable among racial skills. Below are changes and additions designed to make the majority of racial skills at least potentially interesting.

Humans needed the most work. Their skills were rife with Walks and Runs, and a lot of their higher-rated cards were gold filtering cards with net 0 card advantage or team moves, which are great in multiplayer but often unimpressive in the campaign.

We decided the vanilla movement cards had to go, so we replaced them.

You’ll notice that for the most part, these are low-level peasant items, designed to be decent alternatives in the early campaign. These items will be added to the game without replacing any existing items.

But plenty of existing items will change:

• Wimpy replaces Shuffle.
• Battlefield Training and Advanced Battlefield Training now have Cantrip. The former joins the latter at range 6.
• Desperate Block blocks fewer things more of the time: 66% chance to block any damage 6 or more.
• Retreat now allows the character playing it to move as well.
• Shuffle, Team! has traditionally been overvalued; we’re reducing it to a bronze card, which lowers the levels of all items it’s on. 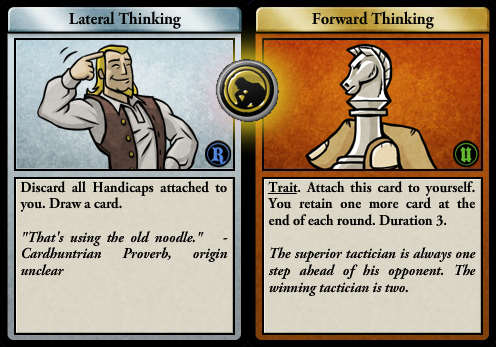 Dwarves overwhelmingly had the highest percentage of racial skills that were totally viable both in campaign and in multiplayer. We just gave them two more tokenless peasant skills to round things out, and made no changes to any of their other stuff.

Oh, elves. You magnificently squishy folk. Since our changes to control cards, elves have become much more viable in multiplayer, but they still had some of the absolute worst racial skill items. Tons of these items were laden with vanilla movement cards that did not synergize in any way with the elves’ already high base move speed, giving elves more of what they have and none of what they need. Mobility is still the theme of elves, of course—so we looked into giving them more interesting mobility.

For starters, we took all the Dashes and Runs and Walks and Cautious Sneaks out of the picture.

We also gave a discount to Dodge on elf skills, as well as Violent Spin and Muscle Through, which will be replacing some Jump Backs and Energizing Moves. Elves should reign when it comes to positioning, and it was a mistake not to give them these cards all along.

We also increased Jump Back‘s movement to 2 from 1.

Lastly, we saved elves from their own cowardice. The fair elves are craven no more, as Cowardly has been completely removed from their stable of skills.

Overall, we hope these changes will make elves more interesting both in the campaign and in multiplayer. We’re really excited to say that there are many fewer boring or terrible skill items in the game with these changes, and while there isn’t a totally flat power curve, we expect you’ll find a lot more real options at various stages of the game.

That should about cover it for racial skills.