In the morning, you follow Captain Teadora along the river path to Svitlana’s camp. Unlike Teadora’s town, where humans, dwarves, and elves toiled side by side to secure the perimeter, Svitlana’s camp seems to be composed only of elves with silver skin.

“Welcome, heroes,” says Svitlana. “I was hoping the Baron would send you. Come, my silversmiths will outfit you.”

This is your first encounter with the elves of the Silver Forest. You’ve heard the rumors that fey blood runs in their veins, but they tend to keep to themselves, and it is well known that their forest is haunted and dangerous. Besides accidental appearances in the Caverns of Chaos, there hasn’t been a sighting of one of the feyborn elves in over a hundred years.

A couple smiths wheel a cart of weapons over to you. You arm yourselves and thank Svitlana.

“You look like you have questions,” says Svitlana. “Allow me to answer them. Ever since Countess Jovana’s ascension to the throne of Castle Mitternacht, the night has taken the land like a plague, transforming the peasantry into horrible creatures with no goal but the destruction of civilization. Witches, spirits, werebeasts, and vampires rampage across the countryside. These monstrosities are new to this land, but our forest is no stranger to such incursions, and our people have long known how to stymie them. In order to save the most lives, we are here to share our secrets with you, and to bring the fight back to the Jovana and Yurik.”

“We are learning how to forge these weapons ourselves,” says Captain Teadora. “It seems only elves can learn the magic required to craft potent feysteel weapons, so the townships are conscripting all able-bodied elves in the forges.”

Svitlana does not look happy about this, but she also does not seem too happy to have left her forest in the first place. She notices your concern and shakes her head.

“We guard our secrets jealously, it is true, but we are not cruel.”

“Speaking of which,” says a young silversmith by Svitlana’s side, “you should probably wear these. They will identify you as members of our inquisition against Jovana’s blight, and turn silver before it can harm you.” 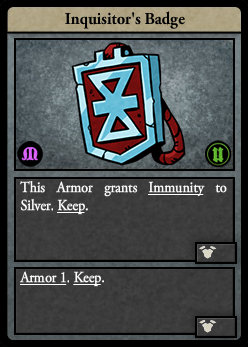 You accept the badges hesitantly. “Inquisition?”

“In order to enlist as many people as possible in our fight, we had to appeal to their sense of mob justice,” explains Teadora. 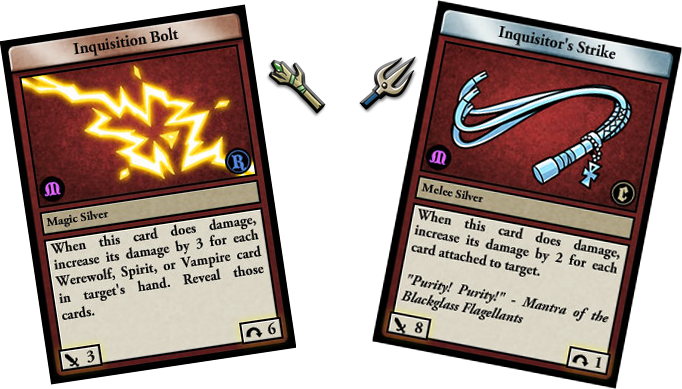 You nod. It would be good to end this conflict as soon as possible. Silver pitchforks, flails, and staves in hand, you announce that you will attack the castle immediately.

Svitlana wishes you well, but warns you to be careful.

“You might not notice the afflicted until it is too late. Sometimes you can spot a wound or deformity, but most of the time people look perfectly normal until they have their fangs in you.”

As if on cue, one of Teadora’s guards howls, then pounces on her.

She deflects his first attack effortlessly, but even as Svitlana’s elves ready their magic he begins to grow and charges again. His clothes burst at the seams, exposing thick fur. Thankfully the werewolf is outnumbered and quickly dispatched, but the rapidity with which he attacked convinces you that Svitlana’s warning was warranted.

Svitlana’s elves check Teadora carefully for wounds. “You never know when the corruption could spread.”

The entire camp mourns the fallen soldier. You excuse yourselves, thanking Teadora and Svitlana and explaining that you want to make haste. The castle is still a little more than a day’s ride away.

Later that night, you relax by your campfire, and reflect on your new information. The werewolf in Svitlana’s camp seemed fast and incredibly tough. You briefly consider that it might not be bad to be so strong.

This is Part 3 of our Castle Mitternacht preview. Part 4 is up! You can also read Part 2 here.

One Response to “Introducing Werewolves”