OK, this is the third and final instalment of this series of diaries about our reaction cards. In the first one I talked about our old reaction system and, then, in the second one, Skaff talked about his and Richard’s proposal to create a new system based on automatic responsive play. So I think we’ve talked enough about the process by which we got to this system and now I just want to introduce it properly.

There are two main sorts of reactive cards in the game: blocks and armor. We’ve seen a block card in this week’s card preview. In case you missed it, here it is again: 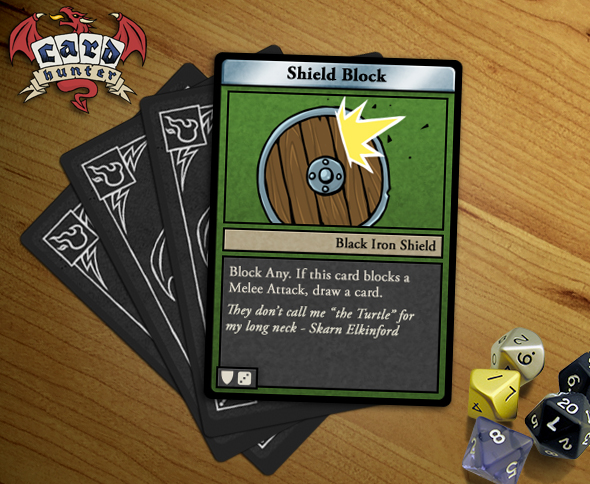 Blocks are great because they will complete nullify an enemy card. In this case, it doesn’t matter what the card is – it could be a melee attack or a spell – it just doesn’t matter, because the shield block will take care of it, assuming you roll high enough. To remind you, what happens is that when your opponent plays a card targeting you, you roll a die (or rather, the computer rolls for you) and, if you roll a 3 or higher, the Shield Block “triggers” and stops their card dead.

What are their down-sides? Well, there are a couple:

Hmm, so what if you want long-term all-around protection instead? Well, then you want some Armor! 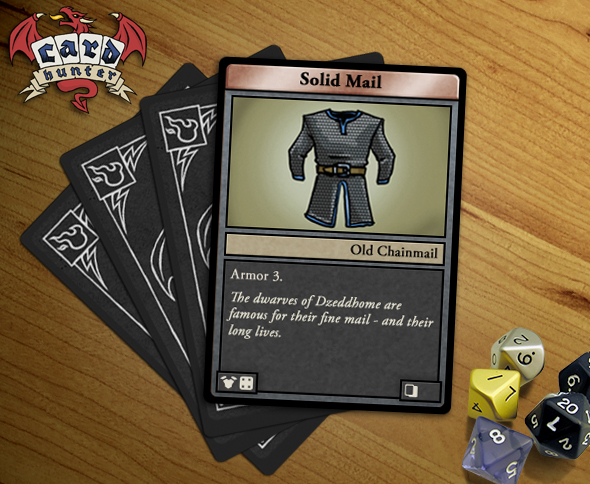 As another bonus, Armor also works from all around, so you don’t need to worry about getting stabbed in the back quite as much.

Why would you ever use a Block card then? Well, Blocks have their advantages too. Although Armor is pretty durable, it’s not as much use if your opponent has a really damaging Attack. If I get hit for 10 damage and only have 7 health, the fact that my Armor reduced the damage by 3 isn’t going to seem that exciting. Additionally, Blocks stop cards dead – they don’t just reduce damage. If an annoying Wizard tries to Teleport me, an Armor card isn’t much use because Teleport doesn’t do any damage anyway. But a Block might be just the thing.

I think you can probably see how useful both Blocks and Armor are. But what’s to stop you just loading up with a ton of Armor cards, sitting back and waiting to bore your opponent to death? Well, for one thing, although Armor is useful, it does eat up a spot in your hand. You might remember that you can only keep two cards at the end of each round. Too much Armor in your deck, and you’ll end up throwing a lot of cards out because you just can’t use them. Additionally, every time an Armor card triggers, it reveals itself to your opponent. A smart game designer might make sure that there are a bunch of cards in the game that force players to discard cards that have been revealed…

So Armor is plenty counter-able and so are Blocks. But they are definitely useful parts of a defensively minded character’s arsenal. And these are just the simplest examples of our reaction cards. There are lots of other ways we use this system to create interesting cards and strategies. We’ll be revealing those over the coming weeks in our card previews.

Meanwhile, next week we’re going to take a break from game system design and talk about the game from a completely different point of view.