Dev Diary #8 – Remembrance of Things Past

I want to start talking about a big part of the game that we haven’t delved into at all yet – defenses and reacting to things your opponent does. There’s an interesting story to tell here because it includes a discussion of our development process, how collectible card games work and insights we got from our big gun design helpers: Richard Garfield and Skaff Elias. So this week I’m going to talk about a system that we devised for handling attack and defense and then next week we’ll discuss why we decided to change it and what came next. It’s a good example of our iterative design process at work.

Something I decided early on in the design of Card Hunter was that this should be a combat game based around the notion of attacking and defending. Lots of games incorporate the notion of defense but often it is handled through a simple die roll to see whether you hit or not. I wanted a more interactive experience where you could block a sword strike with a shield or tumble out of the way of a fireball. So, I came up with a highly interactive design to support this. It looked a bit like this. 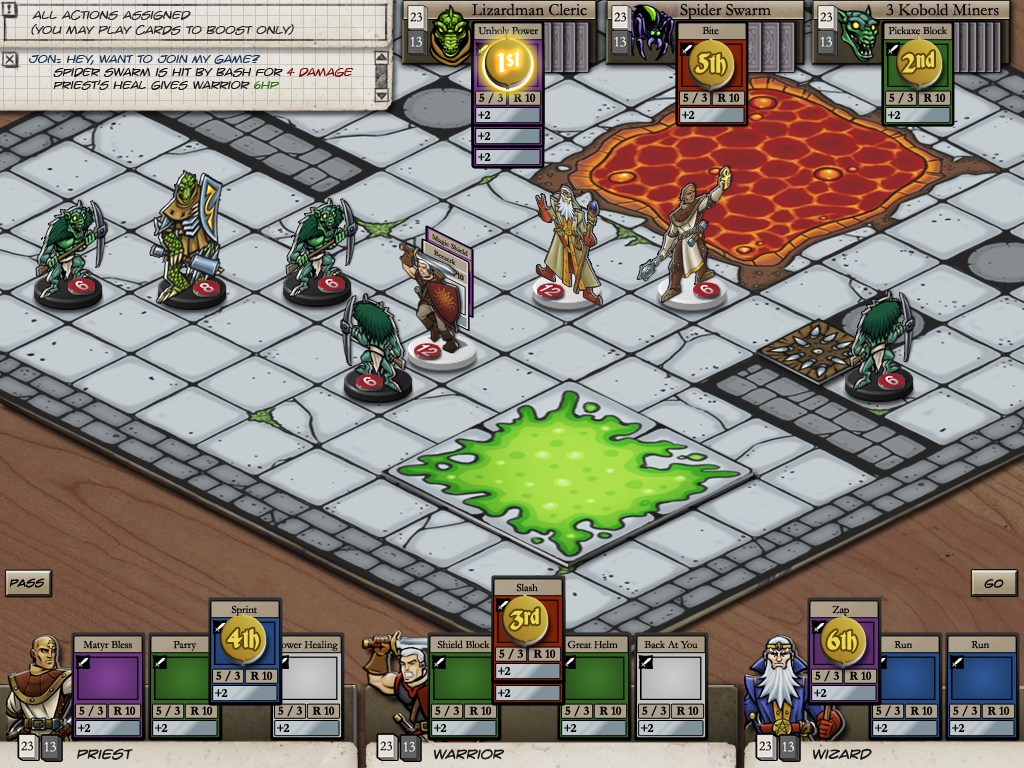 Wow,what’s going on in this picture? Don’t worry too much yet – there’s a lot to explain here and this is the “worst case” situation for the game, designed to show how we would handle the most complex play situation that came up. Let me step back and try to explain it.

In our old design, every card had a speed. Here’s an example of an old-style attack card: 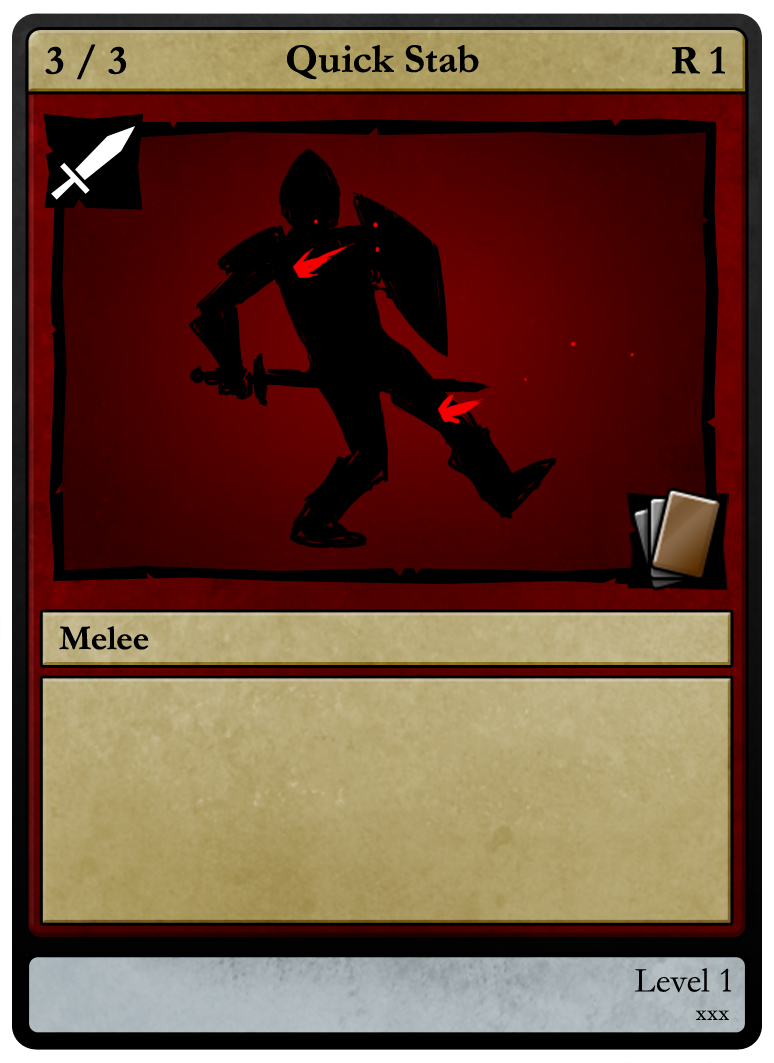 Quick Stab’s speed is 3, you can see from the top left corner of the card (the two numbers refer to speed/damage). Now, here’s the trick – when you play a card, it doesn’t take effect immediately. Instead, the card becomes a pending action and your opponent has a chance to respond – by playing any card that is faster.

One thing your opponent can do in response is to play a defense card, like this: 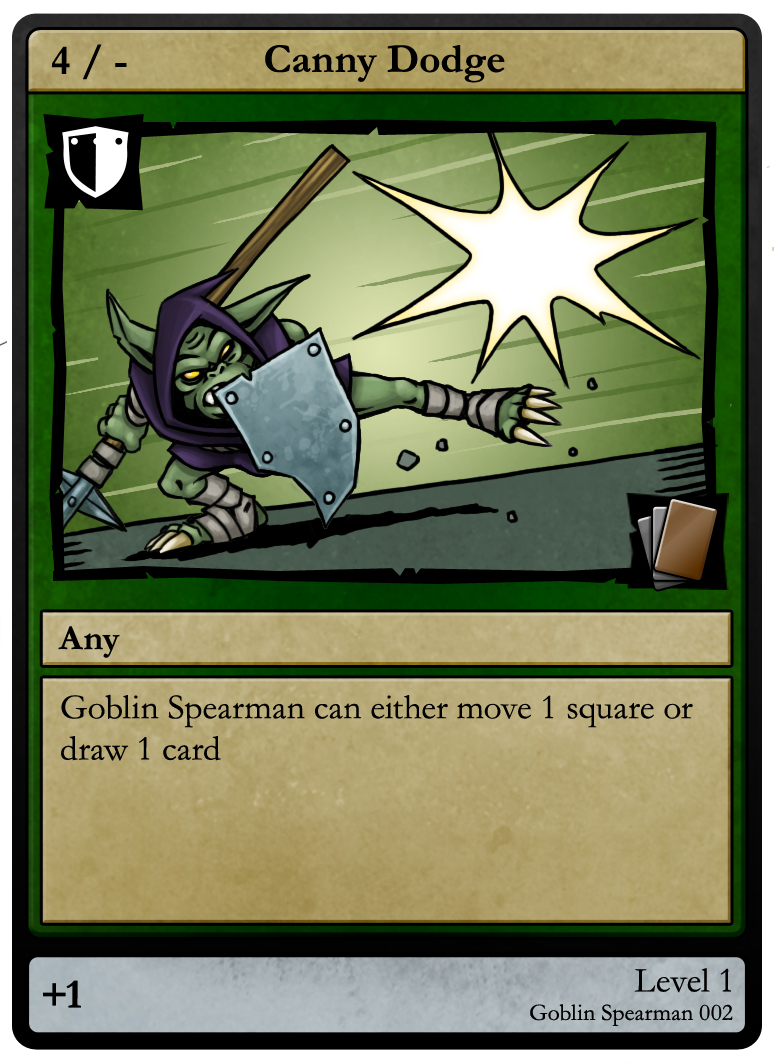 This card has a speed of 4 (it doesn’t do any damage as it is a defense) so it can be played to defend against Quick Stab, which only has a speed of 3.

So, to recap, you played Quick Stab with a speed of 3 and then your opponent played Canny Dodge with a speed of 4. Let’s assume things ended there – the fastest card, the dodge, would take effect first and allow your opponent to evade your attack. And that’s how the defense system used to work.

Is that all there was to our old speed system? Not even close! Here are some other complexities and twists of this system.

The first thing is that you can keep responding to card plays until your opponent declines to respond. What could one do after one’s opponent played a Canny Dodge? One thing you could do is boost your Quick Stab to make it faster than the dodge! Note how these old cards have a silver bar at the bottom. This bar can contain a number like the “+1” on the Canny Dodge. This is the card’s boost value. If a card has a boost value, you can play it underneath an already played card to boost that card’s speed. Let’s go back to our example where you played Quick Stab (3) and then your opponent played Canny Dodge (4). Now let’s say you had this card in your hand: 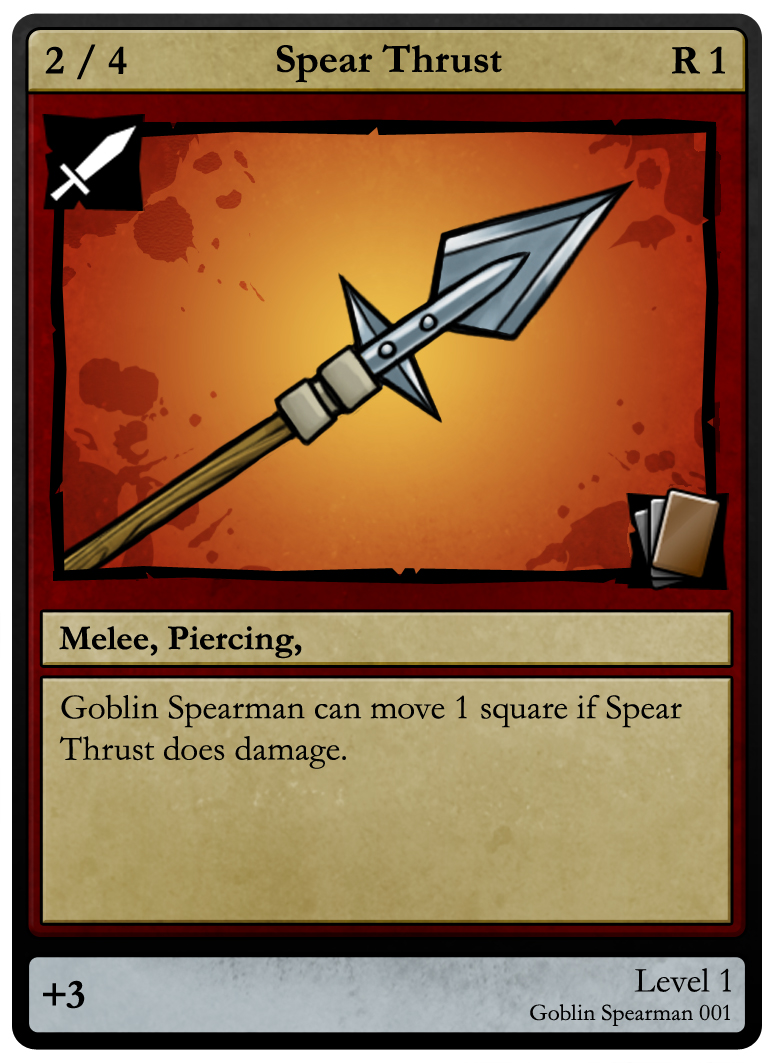 (Why do you have a Goblin card in your hand – I don’t know, maybe you ARE a goblin?)
Anyway, this card has a boot value of +3, so if you play it under your Quick Stab, the stab’s speed is now 6 (3 + 3) and is faster than the dodge. Unless your opponent can boost their card too, you are going to stab them before they can dodge.

So, I think you can see how these exchanges can play out now – each player gets a chance to boost their card until someone runs out of cards or decides enough is enough. You can probably make a bit more sense of the battle screen up above now too (click on it to expand if you can’t make it out). The Lizardman Cleric has played Unholy Power, a 5/3 card, with a speed of 5. But he has boosted it with 3 +2 boosts, making its total speed 11. That makes it the fastest of all the actions in play and means that it will take effect first when everyone has finished boosting.

A couple more things to note from that battle screen mockup. One is that everyone has played a card – like I said, it’s the most complex situation that could occur. As well as boosting your own card’s speed, you can respond to your opponent by playing another card! That means you can get very complex situations with many cards in play (waiting to take effect) at once. Also, note that each played card has a counter on it showing in which order it will take effect. The Unholy Power has a 1 on it, indicating it will go first and so on (the actual speed and boost values on the cards are just placeholder since this was just a mockup so don’t over-analyse this picture!).

So – what was the point of telling you this story, since we don’t actually use this system in the game anymore? One is that it’s of historical interest and, I think, quite an interesting and fun system. You can get some very complex and involved decisions to be made, trying to decide whether to use your cards to boost things or save them for later. It’s got a nice gambling element, since you don’t know what your opponent has in hand or how far you can push them to win a particularly important speed boosting war. It also allows you to “burn up” cards you have no use for, boosting the speed of other cards. But this system had one important drawback and that’s what we’re going to discuss next week when Skaff will be telling us what he and Richard thought when they played the prototype of this system and what they proposed to replace it with.

7 Responses to “Dev Diary #8 – Remembrance of Things Past”