Hi, this is Skaff Elias here. Richard Garfield and I were invited to look at Card Hunter back in January. The paragraphs below are what we wrote upon our first review of the game.  They certainly could have been better written and more expository–the weren’t written for public consumption–but I think they hold up fairly well:

These are our suggestions for a modified rules structure to test. The primary goal is reducing play time and also complexity for the player at any one decision point. The thing that makes distributed object games unique is that the player is able to manipulate their deck between games or matches. This off-line strategy test not only sets these games apart, it helps to serve slightly different psychographic make-ups in the players. The deck manipulation often appeals to a more creative mindset, and always appeals to those who feel too much time pressure in the average multiplayer computer game. None of that is saying anything earth-shattering, but the implications for playtime can be somewhat severe—keeping the playtime down for an individual session is even more critical in these types of games to allow the players to have extra chances to modify their decks successfully.

While we need to be careful to not reduce complexity too much, we feel right now the game would be hard to sell to a broad audience, but even with removing 50% of the possible decision space during a single action would still place the game at a very high level of complexity even for the most advanced player. We think there is no need for a timing system or ‘manual’ reactions of any sort in the system. This is a very big change on the surface from the current system, and the heart of our proposal. We believe that you can have a successful game that FEELS reactive by introducing a lot of automatic reactions. Examples of this are cards in the hand that let the player dodge a blow, or parry, or teleport when hit. A sample might be a card which says “30% chance of parrying a blow in melee while in your hand” as a rider to a card which says “attack for 2 damage.” Thus the player might have interesting choices along the way where they decided to burn this card for 2 damage in order to kill someone, or perhaps they avoided conflict for a bit until they drew some of these before charging into battle against the raging barbarian. 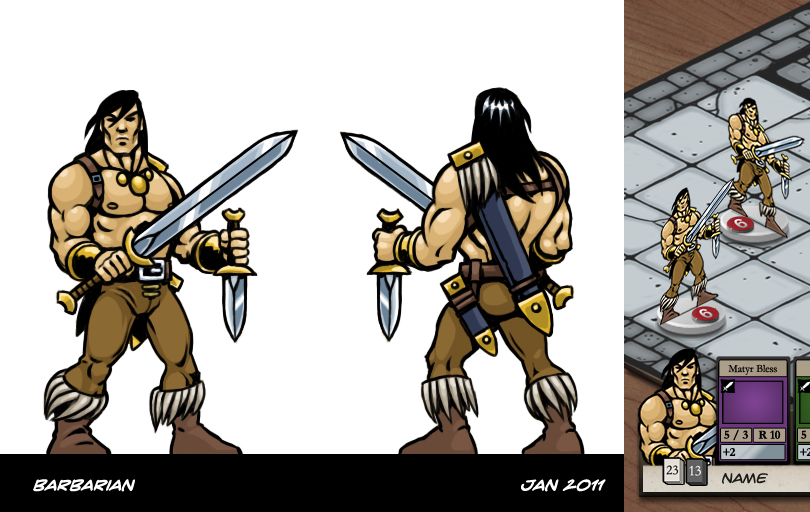 A raging barbarian - because he's cool and to break up the text.

Fundamentally the strategic choices they would make are very similar to those in the current system, and when they actually DO parry, it will feel very reactive (and feel like it was based on their cards in hand and deck). However the complex timing mechanism and lengthy decision process has been removed. Undoubtedly there is a somewhat less complex decision tree, and one vastly smaller in calculation, but the major strategic elements of the deckbuilding and first-order strategic decisions are retained. We feel the gain in simplification and speed is invaluable. Another gain is that players always hate to discard their cards in every game. These decisions(which are very interesting tactically) always leave somewhat of a bad taste in the player’s mouth because they gave up their ‘super swing’ to add +3 to some other card’s speed (or in many games you have to discard your ‘super swing’ to cast a ‘minor swing’, etc.). In games with a high level of abstraction this is less the case, but in games that have a nice feel of integration with some sort of simulation it can be painful, and especially painful for the more casual player.

We also feel that the end result might not be very different from the current system—it’s quite often in our limited play that somebody decided to not react (or couldn’t react, or couldn’t figure out if they could successfully react) until one or two critical points where whole hands were dumped, and somebody ended up being crushed for their massive card expenditure.

This will require a fairly large rewrite of the cardset, but we feel it’s important as your first impulse to shift the burden of the game onto the cards rather than the rules, i.e. in order to make a reactive-feeling strategic game push down that ability onto the card text before you introduce the complex reaction system.

There are some issues with this proposal, however, that we should mention. The primary one is how information is displayed. Should the opponent know you have a dodge in your hand? Our answer is no, until it is actually used, then it appears. Should there be cards that give a static 19% parry chance while in hand, or should the card be discarded when it successfully parries? If lots of cards have static effects does it become a burden because you will have to look at the opponent’s cards-in-hand to see what abilities they have? We don’t at all like the alternative (assuming we have cards with static effects) where they are secret, or if they are revealed once become hidden again (since this will lead to players feeling like they have to write down stuff once they see it).

We intend to control this in several ways. Firstly, a card as an effect should never be revealed until it is used. So a parry doesn’t get flipped for both players to see as a static effect unless it actually parries something. Secondly, we expect some of these cards to go away immediately once used so they don’t generate an ongoing static effect. Thirdly (and this ties in to point 5 below) since we do want some cards to be held as ongoing effects we would suggest putting something like a probabilistic discard on them. So 3 different cards might read: 10% parry while in hand; automatically parry the next blow, then discard this card; and 30% chance of parry—this card has a 30% chance of being discarded after use. The first of these might lead to problems of too many ongoing effects on a character, the second doesn’t allow for a feel of long-term building or state change, and the third one achieves a nice balance, but at the cost of some extra complexity. We feel that complexity is worth it in the long run as players adapt to the system. Probably, however, we expect all 3 of these different reactive card types to be viable options for the set—the key will be balancing them to achieve the goal of 1-2 static effects going on on the average character after several turns have gone by.

Another type of ‘reaction’ card is one that takes into account the opponent’s action retroactively. For instance a healing card like: First Aid—Heal 5 damage if you were damaged this turn. Similar cards that grant movement or attack bonuses will give much of the feel and strategy of reactive play without introducing a complicated timing sequence.

After the system was changed it moved MUCH faster, and the game flow felt a lot more like an RPG.  Luckily, the cards and deck construction still felt very important, and still provided enough hidden information for the attacker that the system felt reactive.  When Richard and I look at games we don’t really tend to think of the raw amount of decisions or strategy associated with them as important in and of themselves–it’s the RATE at which those decisions occur which is important.  So you could remove this enormously complex part of the system and at the end of the day not be playing a tactically less interesting game.  You are simply spending your time on different decisions, and ideally ones that correspond to a smoother gameflow.  You’ve gained ‘for free’ the lessened rules complexity associated with the removed system, and even more critically you’ve reduced the number of times in a turn the players have to go back and forth waiting for each other to respond (99% of the time in the negative).

It’s always painful to remove strategy in strategy games, but it’s a discipline that can result in a better end product.  If some total amount of strategy were worth anything, you could always play Chess to see which player gets to go first.

Next week Jon is going to write more about how this feedback was integrated into the game itself.