I’m Kevin Kulp, one of the designers working on Card Hunter. If you’ve been active on D&D message boards over the last decade you may also know me as Piratecat, one of the folks who helps run the D&D site www.enworld.org. With 30 years or so of RPG campaign design behind me, along with a handful of published credits, one of the reasons I’m on the Card Hunter team to help build the world that Card Hunter inhabits.

I grew up fascinated by names like Mordenkainen and Bigby, iconic wizards who created uniquely named spells; legendary figures like Gaxx and Dahlver-Nar and Tuerny the Merciless, who created artifacts and relics of astounding power; and pregenerated adventurers in the back of modules with names like Fonkin Hoddypeak, Beek Gwenders of Croodle, or Gleep Wurp the Eyebiter*, who faced down a whole mess of giants with the most unfortunate appellations imaginable. That takes heroism, that does. This sense of mystery is the sort of spirit we’re working to capture.

World building and history in a game like Card Hunter is always a dicey proposition because people come to games for different things. Some folks aren’t going to care about flavor text, so the game will need to play just fine even if you never ask yourself who created your magic items and dungeons. We’re building in something deeper for the people who are interested.

So the question becomes “how do you tell the story?” That’s something we’re working on now. Flavor text on cards is one way, of course. There are well known adventurers out there, and there have been a number of famous heroes who took mules loaded down with  powerful items into dungeons and then never came out again. You’ll be going into those same dungeons, so you’ll run across some of their thoughts and tactics as you build and play your decks. 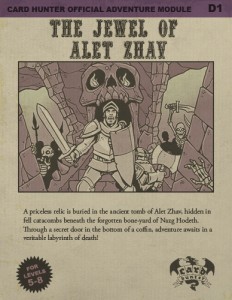 Another method is the nature and history of each dungeon. Sure, in adventure module D1 you’re raiding the Black Mausoleum of Nazg Hodeth in order to seize the Jewel of Alet Zhav, but who is the guy? Throughout play you may find out that he was the first orcish warlord to swear allegiance to the Eternal Empress, and old nannies still tell their children terrifying stories about how he cut out his own heart in order to replace it with a necromancer’s gem. He thought it was going to make him live forever. He was wrong. But while you’re down there in the crypt, hip-deep in zombies with your sword a-swinging, you may get to learn a little more about the empire’s history. We’ll try to make sure that comes in handy later on.

I’m a big believer in mystery and surprises as you work out a world’s history, so don’t trust everything I tell you. The world of Card Hunter (which we should really stop calling “Cardhuntria” in our internal documentation) is one where wizards used to be embarrassingly weak. Spells had little more effect than lighting a fireplace or scaring recalcitrant goats, and wizards were forced into academies that were more leper colonies than schools. Then about 400 years ago, the girl who would become the Eternal Empress discovered that spells could be bound into objects. Doing so amplified them immeasurably. Suddenly, for the first time, the wizards had real power.

All things considered, the revolution didn’t take very long at all.

The problem with running an empire filled with wily, ambitious mages should be fairly obvious if you’ve ever run across office or academic politics. The Eternal Empress solved this by creating a society where all wizards were nobles, and social stature was directly linked to the creativity and power of each wizard’s newest magical objects. Only those wizards who constantly created new devices were shown imperial favor in court, and it sure is hard to plan a rebellion when all your time is spent in a magical lab. In this way the Empress channeled her subjects’ energies into creation instead of rebellion, and the noble wizards settled into decades of fierce politicking and backstabbing instead of all-out magical war. 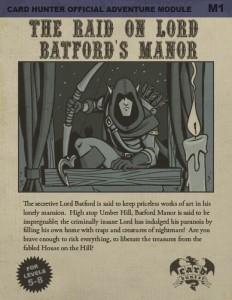 The constant flow of new magical items needed a use, though, so wizards soon equipped their gladiators and adventurers with the latest in magical armaments. The empire grew in leaps and bounds as these powerful explorers pushed back the edges of the map. Vaults were built, vast labyrinths and castles constructed to protect the new-found wealth.  It was a pretty good time to be alive until the Eternal Empress turned out to not be so eternal after all. Her death — maybe her assassination — ripped the empire apart both politically and physically, with seas roiling and mountains collapsing. No one has been able to make a new magical item since her death, and many of the old vaults are buried deep beneath ruined cities.

Card Hunter starts hundreds of years later. Civilization has more or less rebuilt itself since the times of the Eternal Empress, with monstrous populations doing their best to wipe out humanity and the civilized people doing their best to reshape the world. You’re going to be using those ancient and marvelous items, assuming you can find them. Get hunting.

* All names in this paragraph, even the unusual ones, are (c) Wizards of the Coast.