Hello and welcome to a special “road warrior” dev diary. Not in the Mad Max sense, but in the “I’m writing this while waiting for my flight at LAX sense.” As a result, this diary will be short on graphics and probably fairly short on text too because typing on an iPad keyboard is slow and painful.
I’ll add some pictures – Farbs

So, this week I thought I would break the mold a little and fill you in a little on where we are up to on the project and what we’re working on currently. Believe it or not, we actually work to milestones on this project. These milestones are pretty vague but they help us to organize our work. We’re only on milestone four right now after a year of development, so each one takes quite a while.

The first milestone was to get a basic version of the client up and running – not too exciting. 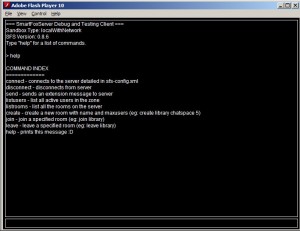 Our original, text-only client.
We played entire battles with this!

The next one was to get the actual card playing battle system fully functional. That one took a while. 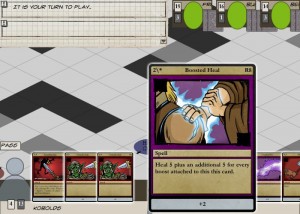 Milestone three was to create the deck building part of the game, so that you can create characters and parties and load them out with gear to create your decks. 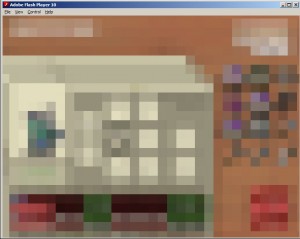 Sorry, we’re not showing the deckbuilder yet!

The milestone we’re working on now is a big one. The goal is to “close the loop” of the game so that we can get a sense of how it plays on a larger scale than individual battles. The “loop” in this case is the process of building a deck, going on an adventure, fighting battles, winning treasure and then using that treasure to revise your deck. That’s what makes the game tick.

Whenever we embark on a milestone like this, the first thing we do is figure out an actual playable instance of what we want to achieve. So, in this case, we decided that what we needed was a set of five adventures that could be played in sequence. We wanted a “starting set” of equipment to give out at the start and then a series of adventures, increasing in difficulty and each of which presents a different challenge, requiring the player to rebuild and refit their adventuring party each time.

At this point Jon boarded his flight, leaving us to wonder: When will milestone four finish? And how many more milestones remain before the public beta? These questions and more may be answered next week, as we continue to diarise the development of Card Hunter. See you then!